How To Find Out If Your Ex Still Loves You 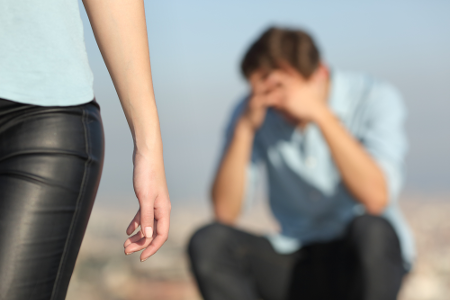 So you’re wondering whether your ex still has feelings for you or not.

Well, to start out, I’m going to give you what you want. Here are some definite signs your ex still loves you:

1. He displays strong emotions about you (like he gets angry when he talks about you)
2. He goes hot and cold on you, sometimes calling and texting all the time and other times ignoring you
3. He sends you drunk texts and calls you when he’s drunk
4. He goes out of his way to try to make you jealous

So you’re looking to microanalyze everything he does to try to figure out how he really feels.
Well, here’s the good news: it’s really simple to find out the answer.

If he’s displaying some of the behaviors listed above, then he’s still got feelings for you.

But here’s the bad news: obsessing about what “signs” he’s showing isn’t going to help you get him back. In fact, it will actually drive him away.

If you’re obsessing about him, you’re playing right into his hands.

See, when he displays any of the behaviors above, all he really wants is one thing: attention from you.

If you give him that attention – it’s going to reinforce his behavior and make him keep behaving badly.

Plus, it lets him know that you’re still not over him – and that he can go to you for attention and validation whenever he wants.

READ THIS
Make Him Think He Has Lost You To Make Him Want You Again!

Here’s the truth – how guys deal with breakups is the same as how girls deal with breakups – it’s messy. For a period of time after your breakup, of course your ex will still have feelings for you – especially right afterwards. It would be weird if he didn’t.

He doesn’t just drop you from his mind – just like you didn’t drop him from yours.

But if you want him back, the best thing you can do is let him go.

I know that sounds like a paradox, but it’s actually really simple:

If you give him what he wants from you (attention) while you’re broken up – he will have no reason and no motivation to get back together with you.

He’ll be getting the attention he wants without being in a relationship with you – so he’ll have no incentive to change the situation.

However, if you don’t give him the attention he’s craving, you’ll force him to confront his own feelings.
And then if he wants your care, he’ll actually have to try to get back together with you.

There’s another benefit to moving on – when you do, you give yourself the space to move on with your life and rediscover the things that make you happy when you’re on your own.

You have the time and space to go after the things that make you happy. The most powerful way to become more attractive to men is to live your life in a way that makes you feel happy and fulfilled.

So pick up hobbies you might have dropped by the wayside, go to the gym and channel breakup energy into a workout, and try to see friends you might not have seen in a while.

At the same time – go out on dates with guys you’re interested in. Try most of all to have fun – you’ll be surprised at how easy it becomes to move on from him.

And when he sees that you’re not sitting at home pining over him, but rather going out and living your life, he will know that he has to get off his butt and win you back – or he’s going to lose you.

All these things will make you more attractive to men – and will demonstrate to him that it’s time for him to “put up or shut up”, and try to get you back or risk losing you.

That’s the only way to truly motivate him to get you back – and it’s way more effective than playing into his games.

Vixendaily.com is the only site out there that specializes in mind-reading quizzes, content and advice tailored to your particular needs.  It’s like having your own personal mentor guiding you through life’s challenges every step of the way!

It was founded by dating and relationship expert, Nick Bastion, who is the main contributor to the Love & Relationship Advice section of the site.