Getting an ex back when they are with someone else is possible! Here’s proof… 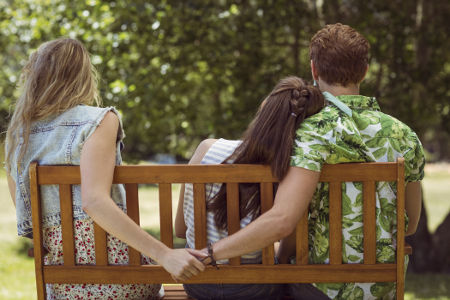 Today I’m not going to give you advice like I usually do. This time I’m going to tell you a story about the coaching experience I had last week. One of the people I coach, Farid, succeeded in getting together with his ex when it seemed like all hope was lost (or so he thought before he got in touch with me!) So it is with immense joy that I write these lines and share this anecdote with you.

This article is for the skeptics; all the people that think that’s impossible to rebuild a relationship after a breakup, especially when a new boyfriend or girlfriend is involved.

This way of thinking couldn’t be farther from the truth. Getting an ex back when they are with someone else is completely possible and after what I’ve just experienced, I can confirm it loud and clear!

We worked tirelessly for 9 months with Farid to make his ex come back and start a new and imroved relationship. I still remember his phone call when he was in complete dismay after another relationship expert had told him to “give up and let go.” Great advice from a so-called “professional…” So I listened to his story and we began to analyze his situation through email correspondence after he had read our eBook.

I told him straight up: “This situation is complex, but I believe in your changes and if you can prove them to your ex, it’s possible that she will come back. But before we start I have to ask you one question: Are you ready to fight for what you want?”

Farid was determined and decided to start the process of getting back together. His significant other had just left him for another man that she had already started seeing while she and Farid were still together.
After 15 years of marriage and two children together, she had decided to throw it all away.

There are still solutions to help you bounce back! Even if your ex left you for someone else

During these 9 months, we used many unique techniques to show to his ex that Farid had changed. We used inverse psychology, self-improvement, and focused on his dreams and goals in order to ultimately create a strong emotional reaction from her.

Nobody could deny that he had become a new man and that he had a new taste for life. He was happier, he was no longer attached to useless things, and the biggest thing was that he learned how to communicate properly using his emotions.
His words deeply resonated within his ex, and he was therefore ready to get her back.

Once we completed the first step, which was to get her attention and show her the change in his behavior while establishing proper communication, we were able to set our sights on step #2.

You can’t get back together with somebody without having intimate or powerful moments. What I mean by this is that you need to prove to your ex that they would be the happiest by your side. With Farid we starting setting up convivial moments with his ex in places like wine bars, brunches, little concerts with up and coming artists, exhibits… This worked like a charm because he was able to offer her the perfect relaxing moments that she had been longing for.

He finally understood what she had been wanting for years! And the fact that he was dumped for another man was probably the wake up call that he needed. Paradoxically, it’s when you are faced with a setback that you decide to take action!

If the most hopeless attempts at getting back together can succeed, why not yours?

Getting an ex back when they are with someone else is possible and to find out how look closely at this situation; We went from a breakup in which his ex-wife was seeing another man to a series of rendezvous in which two people that had known each other for 15 years learned how to communicate, have fun, and rediscover one another.

You have a precise idea of the perfect situation in which two people get back together; the type of thing we see in movies. Things are different in real life. This is how you can get your ex back, rebuild affinity between you, and make them want to come back to you and start a new love story, but all in good time. It’s never going to happen in 5 days or after 2 or 3 meetings.

Let go of your past and your emotions. Farid made no errors; He stopped saying, “I love you…You’re the love of my life…I miss you…” NO, he focused only on what was essential. He concentrated on the good and the well-being that needed to be introduced into his life with his ex-wife, so that he could show her that they could have a future together; ultimately he didn’t even have to say these words out loud. If your actions are strong enough, you won’t need words.

The last step is usually the most complex because all the feelings and emotions resurface. You have to conclude your attempt at getting back together by augmenting both physical and emotional attraction. With Farid, we did everything to build sexual tension and so that his wife would once again be attracted to him. In order to do this, we worked on his physique, his look, and his body language. These are the three main steps for showing yourself in a new light to an ex and making them want to come back to you.

READ THIS
Does he still love me?

Once attraction was reestablished, you have to de-dramatize the current situation to show your ex that you’re just there to have a good time. Don’t talk about the “relationship” or the “future” for the moment because the situation isn’t solid enough to handle these subjects yet.

I decided to talk to you about Farid’s experience because it had an impact on me. He fought for months (this wasn’t the fastest process!) but today he’s happy, his relationship has been reinforced, and he is enjoying every moment with his wife and children…He was able to forgive her because he understood that his actions played a large role in what happened and that he wasn’t making his wife happy.

Imagine after 15 years of being together that your wife leaves you for another man; but Farid was strong and brave and fought to become a better person. Some joker that called himself an expert on getting back together with an ex labeled Farid’s story as hopeless, but with me he was able to find the right solutions. In the end it’s up to you to choose the most insightful coach, and to make the proper decisions to get back with your ex!

It would be my pleasure to accompany you in your endeavor and to pass my expertise on to you.

I sincerely wish you the best of luck in your attempt at getting back together and in your love life moving forward!
Don’t hesitate to share this article with friends that are going through a breakup that want to get back with their ex, even if they’ve been cheated on. You can also leave comments with your insightful tips to help others get back together with their ex.

The coach to contact when looking to get back together with an ex!

PS: The individual in the story above agreed to share on the condition of anonymity; Farid is therefore a pseudonym.