What not to do with an ex when looking to get back together! 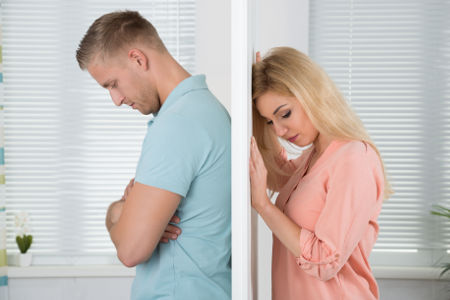 When you want your ex back, there are certain principals to respect, rules to follow, and things to avoid doing in order to make sure you don’t make matters worse and put more distance between you and the person you love.

One of the things to avoid when looking at what not to do with an ex is wanting to start the same exact relationship you had over again. Why is change important? Why is it essential to rebuild a relationship on new, more solid foundations?

For most people that will read what I’m explaining, the answer might seem simple but it consists of combining words and actions and that makes things a little more complicated. Many people don’t adopt the right behavior and ceaselessly make the same mistakes and wonder why they have to act differently.

If you’ve read my articles, or have seen some of my videos, then you know that I always say that a breakup never happens without reason. So even if it was unexpected, your ex didn’t just wake up one morning and decide that they didn’t want to be with your anymore.

You don’t leave someone on a whim, and even if they’re saying that that’s the case, your ex isn’t being honest with you!

There are logical reasons that explain their decision so don’t accept the famous, “It’s not you, it’s me. Don’t change anything; you’re amazing!” Don’t take it the wrong way, I don’t want to make you take full responsibility for your current situation, but I have to be honest with you and tell you that you played a role as well, but I’m sure you already know that.

Nevertheless, this doesn’t mean that you should just give up and that you have no chance to make your ex fall for you again. You have to fight for what you want and I will accompany you so that your actions will be as efficient as possible.

So you will have to start over, and not make the same mistakes again with your ex, and this is crucial. You have to let go of the past so that you can build a new story.

Why is it important to avoid making the same mistakes when I want my ex back?

As I was explaining above in the introduction, the decision to break up wasn’t out of the blue and there were reasons that lead your relationship to this roadblock. That said, it’s important to note that this decision wasn’t easy for your ex to make and they are going through a tough period as well.

Don’t think that they are reveling in the fact that they are now single, that they’re happy about their current situation, and that you’re the only person that’s suffering from a broken heart. I’m going to let you in on something… Your ex is might actually be hurting even more than you!

Yes, I know that this is surprising but this is the truth! Not only are they dealing with the fact that their relationship didn’t work, but also with the fact that they’ve hurt you. Under these circumstances, anyone with even an ounce of humanity would ask themselves, “Did I make the right choice?” or “Couldn’t I give them another chance?”

Whatever the answer is, the good news is that you can make things improve as long as you begin using the proper techniques of getting back together. Advice from your friends and family, about the breakup doesn’t matter; what’s important is figuring out what exactly you want.

READ THIS
How to avoid arguments with your ex when you’re hoping to get them back!

In truth, human beings aren’t meant to be alone and ending a relationship isn’t always easy to accept even if it wasn’t satisfying both people involved. You therefore have to have real reasons as to why you would do it.

The desire to maintain a bond with someone is an advantage especially when your ex is having trouble making a new group of friends. Are you wondering why? Simply because if they feel alone after failed relationship to failed relationship (platonic or romantic,) there is always one person that will always pop back up in their mind: YOU!

If you want to get back together with your ex you will have to make them change their mind regarding their decision to breakup and to make them forget the reasons that made them do it in the first place.

This is typically why I always say how important it is to take a step back and figure out what not to do with an ex as you ponder ways to get back together. If you take everything personally, then you won’t be in a situation that will allow you to act appropriately and your thought process will be altered.

This is why I always recommend not seeing your ex again too soon after the breakup because your ex won’t be able to pick up the changes you’ve made as easily. When you want to get a positive reaction from your ex and get them back, you have to create a sort of electroshock.

It’s important to make them see you in a new light, that you make them forget the way things were in the past, (meaning the negative aspects of your relationship that persisted during the last weeks or months.) You can do this by pinpointing your errors so you know what not to do with your ex anymore!

This person is suffering and doesn’t want to go through the same issues you were having in the past. No longer making the same mistakes will help you to show them that you’ve made improvements, and it will make them feel more inclined to want to make things better between you and propose a healthier and more solid relationship.

Many people think that this is impossible because it must mean that they have to become someone else, to become perfect, and to no longer have any flaws. This isn’t the case at all! All it means is that you have to lose your bad habits and to correspond to your ex’s needs and expectations without losing yourself.

I’m not asking you to never make any mistakes ever again because we are all human and make errors in our love life, our personal life, and in our professional life. In truth, the very first step to getting back together is accepting the breakup, and is this really so hard?

I hope that you shook your head no or at least that you feel reassured, because this is the basis of getting back together!

Reviewing the breakup as well as accepting it are important steps for making positive advancements, and also for beginning your process of getting back together in the best way possible. That is why you’re on this site isn’t it?!

READ THIS
How to attract men by understanding how they think

You want to be together again, that’s for sure, your feelings are still strong but unfortunately you’re not familiar with the proper techniques yet for stealing your ex’s heart again by changing the way you had behaved in the past. In order to do so you have to give your ex a new image of yourself, and you also have to be careful to avoid making false promises.

Just like for many other people, I can imagine that your relationship had some tension and at some point you had promised to make an effort or you had said, “I promise that I’m going to change.” In truth your ex had been waiting for change but nothing happened.

As a result, you two had separated because it seemed like the only solution. But the separation has had an effect because you’ve figured out what exactly your ex needs and you are taking it seriously. But now you have to do everything in your power to make some tangible changes!

The next step (and incidentally I’ve created a special folder on the subject,) is to work on understanding the reasons behind why you’ve separated and to understand why you behaved the way you did.

Right now, you’re the priority. I know you have the tendency to put your ex on a pedestal and to idealize that but the process of getting back together really involves making some personal improvements, and there is no point in trying to seek revenge on your ex.

By understanding the breakup, by knowing why your ex was pushed to make this decision, knowing the sensitive subjects, and knowing what not to do and what to change will help you to build a solid relationship with them.

When you change, you shouldn’t be changing who you are or go against your principals, but you have to improve your habits and your desires so that they correspond to those of the person you love.

Changing for your ex doesn’t mean that you’re supposed to be someone else or to forget about your own personality. You should never try to be the same person as your ex in terms of your behavior, and you shouldn’t stop doing the things that bring you joy just to make your ex happy.

Avoiding making mistakes in order to get your ex back doesn’t involve doing everything to try and be like them.

A relationship involves compromises, sacrifices, and you shouldn’t be the only one that has to change. It would be too easy to take responsibility for everything. Your ex isn’t perfect either!

You have to begin making improvements so that you can start getting positive reactions from your ex and in order to do so it’s imperative that you never appear needy while you’re trying to get back together. There is nothing worse than this, especially when you’re working on proving how you feel!

Your coach when looking for what not to do with an ex,