My ex thinks of me as a friend! 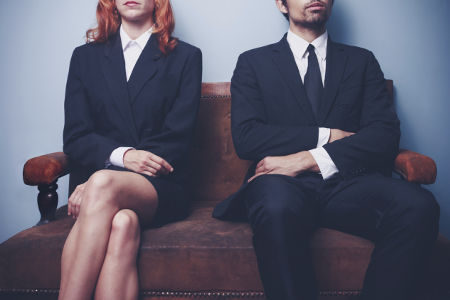 Sometimes when trying to get back together with an ex it can become complicated for surprising reasons. Your relation with your ex may be far from strained, even quite the opposite you may be on good terms and this has you at a disadvantage. Most of the time an ex makes no effort to contact you, makes considerable effort to put distance between you, and can even employ total radio silence. But other times your ex is still close to you, very close to you… too close to you!

At first glance it seems like it’s no big deal, and in fact it’s great because the person you want to get back with still talks to you and keeps in touch on regular basis. The thing is it doesn’t mean that they are necessarily thinking about starting a relationship with you again. They don’t want to burn bridges and want to stay in contact, but above all they may feel as if they are looking for a sincere friendship with you. This can be really disappointing for you because it’s not at all what you have in mind. You don’t want to be the pal that receives a text from time to time. No, you want to be the one that shares everything about their life! In turn such a situation can bring nothing but pain for you.

My ex thinks of me as a friend; I hear this very often and people ask me why their ex feels this way; and more importantly how to change this dynamic. What do you do to make them give you a second chance? How do you turn this situation into what you are hoping it to be? The answer is right here.

My ex thinks of me as a friend and I don’t know why?

Going from lover to friend doesn’t happen by accident. There is an explanation to your ex’s change of heart. Unfortunately it’s not something that is easy to accept, but understanding it is the key to fixing what went wrong, and finding a way to seduce your ex once again.

You probably stopped going out; your sex life was becoming more and more lackluster and infrequent; you had nothing to talk about, you didn’t have plans together… It’s understandable that the one you love now sees you as a friend instead of a partner; because basically you had become roommates. It’s important to never make the mistake of taking a partner’s feelings for granted because you risk going through a pretty big reality check.

READ THIS
The perfect date to get back with your ex

Not expressing your love the right way and boredom in your relationship resulted in your ex feeling frustrated. For months you no longer acted as someone in love and the consequences are disastrous. The game of seduction shouldn’t stop the moment you decide to start a relationship.

Of course there are times when you aren’t able to give your partner your undivided attention; but when it becomes a habit it can result in one of two ways. The first one is the situation in which you find yourself today; your ex begins to see you as a friend because all the emotion has dwindled away. The second is that they stay with you but your relationship stops evolving and a breakup looms over your couple. Under these circumstances you shouldn’t be asking “Why does my ex thinks of me as a friend” but rather what do I do in order to make my ex once again find me attractive. How do I make them see a common future together?

Your ex doesn’t want to hurt you

“You are a gem and I don’t want to lose you.” Many of you have heard these words during the breakup. You could be confused because if you’re so great then why did they leave and why do they see you as just a friend? There is an explanation for their words.

Your ex simply doesn’t want to hurt you or be too brutal when they have nothing major to reprimand you for. To break up with you while leaving you a glimmer of hope by being nice is also a way for them to keep a clear conscience during a breakup.

They aren’t really saying what they’re thinking; giving a false pretext to try to prevent you from getting too emotional and hurt. At first they aren’t going to cut all contact but if you don’t do anything or try to approach them you will realize that their desire to be friends wasn’t sincere.

Become a new person to grab their attention

I’m wiling to bet that the friend-zone is not where you want to be, and you’re absolutely right!

READ THIS
How to avoid arguments with your ex when you’re hoping to get them back!

If you love your ex don’t give up, because it’s completely possible to fix the situation and start to seduce them again. If you think, “My ex sees me as a friend all hope is lost…” you have to change your mindset right away. It’s totally possible to get out of the friend zone and make room for love. In fact, I’ve already explored the topic in another article that you can find here.

But it’s a particular situation that we are focusing on here. You’re not their childhood friend that has always secretly been in love with them. No, you’ve already been together in a relationship with this person so the strategy will have to be adapted to the specificity of your story. Of course the tips that I provide in articles on the friendzone will be useful to you as well, but you will have to supplement them with techniques on how to get back with an ex.

Whether or not your ex wants you as a friend the first step is always the same; accept the breakup and understand why the separation occurred. Once you have taken this step, you will be able to define what actions need to take place in order to revive their feelings for you.

Radio silence, the hand-written letter and other methods of getting back together with an ex shouldn’t be put on the backburner. Oftentimes when your significant other decides that it would be best to just be friends you don’t have the right reactions. You don’t take the necessary step back and you continue to send text messages to them all day long as if nothing had happened… And on top of that, the texts being sent aren’t the messages I suggest sending in this article.

Don’t forget that there was a breakup and that you want more than just friendship. So now you’re going to have to follow the right game plan to make your ex want to get back together!

Your coach when your ex wants to be friends,