My boyfriend wants to take a break what do I do? 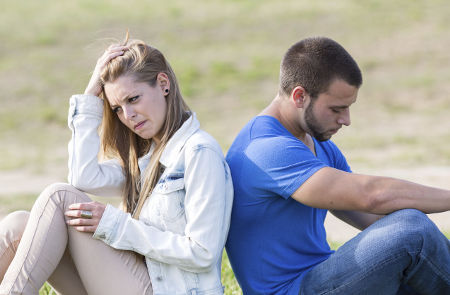 We often wonder what the best solution is when facing serious recurring problems in a relationship. Making the right decision is no small matter as you’re risking flipping your entire life upside down. So you’re facing a real dilemma. Should you rethink the entire way in which you communicate, or should you go with something as radical as a breakup? Your boyfriend has decided to take time to reevaluate, without fully putting an end to your relationship just yet. He of course loves you but the idea of a future together is rocky and so he needs some time to think things through.

This is why he’s decided to take a break. Even if it might be a way for him to ease you into a full blown breakup, know that you still have a chance to stay together and revamp your relationship! The thing is that you’re going to have to make some radical changes and to really work on yourself. When you think to yourself “my boyfriend wants to take a break” it can be the perfect electroshock you needed to do what needs to be done in order to put the pieces back together and turn your relationship into what it once was.

Taking a break in a relationship; Is this a good idea?

When fights are becoming more and more intense and you’re agreeing less and less, but breaking up seems way too drastic, there is a middle ground and most people refer to it as simply taking a “Break”. It’s a balance if you will between ending a relationship and continuing while pretending that everything is fine.

It’s certainly not the best solution but it has its advantages. When it seems too radical to break up after the smallest disagreement or misunderstanding, some people choose “the lesser of two evils.” By this I mean they choose to take a break, to still leave the door open or a kind of second chance.

Nevertheless, when you hear that he wants to press pause, you probably begin to question everything but not necessarily in best way. When a girl says, “my boyfriend wants to take a break” the fear that becomes predominant can lead her to make some big mistakes.

I only know it too well because after all these years that I’ve been coaching couples in similar situations, there is always a recurring theme! Interestingly, it’s most often young couples that I encounter that find themselves in this position; but there are certain exceptions.

READ THIS
My Girlfriend broke up with me: What should I do NOW ?

If you’re ready to accept criticism and to use it to improve, then a break could prove to be very beneficial. But if it’s the opposite and you can’t stand criticism, or think the entire world is out to get you, it would probably be best to end the whole thing now. This could also help you avoid suffering after a breakup while transitioning from deception to serious depression. To put it in simpler terms if the person you’re with just likes you for your nice backside and is using this as a way to manipulate you, then I think it’s preferable to rip the tape off in one swift motion, to let yourself heal and rebuild instead of prolonging the inevitable while suffering more and more psychologically. I know it sounds a little cartoonish, but I can assure you that the pain I see in some women after a breakup is far from pleasant. So a piece of advice; don’t let anyone psychologically damage you. Maybe I’m an idealist, but I feel that everyone has the right to be loved, and heartache is all too common. I wouldn’t wish it upon anybody.

Why not just break up?

There is a sizeable difference between breaking up and taking a break. For some people, they feel that these two things are one in the same, but I can promise you that this isn’t the case.

I explained that taking some distance between you two isn’t always a bad thing, but I haven’t yet explained what a “break” really means.

It isn’t just a question of making space, and then coming back when he feels like it. No, it’s a way to draw attention to your relationship, and to the problems that currently exist within it. When you’re in the thick of it, you are often flooded with emotions that can prevent you from thinking clearly. You need to take the time to think, to breathe, and to revitalize, in order to make the best possible decisions.

By deciding to take a break, your boyfriend isn’t ruling out reconciliation. In fact, most of the time he’s convinced that there’s a way to still make it work. A real breakup is definitive; when you hear the words “it’s OVER.”

Breaking up with someone isn’t always the best option, and you can end up with quote of a broken heart while blaming yourself for weeks. If you want to bring your ex to regret his decision, we will have to analyze the situation, and find the best solution for him to feel happy by your side.

READ THIS
Why Do I Miss Him?

My boyfriend wants to take a break; does he still love me?

The main concern that men have when wanting to take a break from their girlfriends is that their partner could recover better and faster than they can. They’re worried that if they break up and their women find someone new, then they will be left alone feeling like idiots. So they opt to simply take break, to give them time and keep their options open.

So to answer your question, yes! He still loves you. However, he’s considering giving it another shot but you need to take the reigns. Of course you shouldn’t harass him and constantly tell him how you feel. Take this as an opportunity to take a step back; your goal should be to put in place an inverted dependency. This means that whatever you feel, he will also have to feel as well.

By letting him know that you need space, and by putting distance between you (not necessarily physically; but emotionally) you could awaken a fear of losing you. Don’t let tears get the better of you, show him that you are strong and he’ll be running after you in no time!

This is not the time to use communication as a means to show your ex that you want a second chance, because he won’t be open to dialogue. He doesn’t want words anymore; he wants to see tangible changes. So be subtle as you make him understand that he’s been wrong to doubt you and that you are willing and able to make real changes.

I know you don’t want to break up (otherwise you wouldn’t be reading this right now) but you also need time and space to reflect. A break in a relationship could be the solution that changes everything.