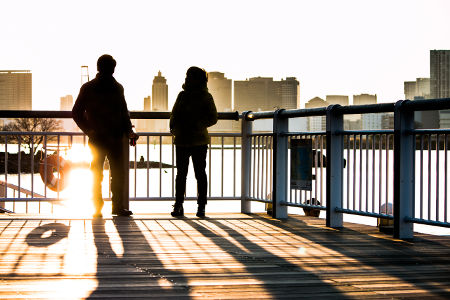 Your partner hasn’t just brought up a simple breakup; they’ve brought up divorce. Most people realize how important their significant other really is to them when they’re about to lose them. There is a psychological difference between the words “breakup” and “divorce.” ‘One of these terms is actually ‘stronger’ than the other, and now you’re realizing how true that statement is. Despite the issues you two had been having, one thing is still certain: your feelings for your partner still burn strong.

The reason why you’re on this site looking for guidance from a coach specialized in this type of issue is that you want the situation to evolve after realizing “my ex wants a divorce, how to save my marriage”. Even if deep down you’re full of doubt and you’re not very convinced that your ex would return, you’re still hoping that they will. When a person wants to forget about the past you shared and to not fight for your marriage, it’s time to do some work.

Space begins to form between you and the separation creeps in almost naturally – which explains why some people don’t feel that they have the desire or the energy to try and get back together. But this isn’t the case for you. It’s not easy to know how you should act when your ex wants a divorce, because it all depends on your situation.

The good news is that there are tools and techniques that will help you to get back on top, avoid making common mistakes, and to get a positive reaction from your ex.

Why does my ex want a divorce?

This is the biggest question when you’re trying to figure out how to act around your ex that wants a divorce. There isn’t one specific way in which each person should act because each relationship is different. One of the most important things to do right now is to avoid making mistakes that will make matters worse, but also to figure out how to approach your ex in order to quickly heal from a painful breakup.

This is why it’s important to understand why they decided to leave. You have to know the exact reasons behind this radical decision.

A person doesn’t decide to throw away years of a relationship and a family on just a whim. The desire to do so had probably been growing in their mind for at least a few months. Whether it’s because of another person, your infidelity, routine, too much space, or even the in-laws, there are just so many possible reasons that could push a couple to separate.

READ THIS
My Ex Girlfriend Wants Space… What Do I Do?!

In today’s consumer society, there is no denying that our love lives have been affected as well. People separate so much more easily than they did in the past; everything goes so much faster, and we think (subconsciously or not) that relationships are disposable, and just like the latest fashion, we get something new each year.

I know I’m exaggerating a little bit, and I’m not judging; it’s just something that I’ve observed as I coach people on a daily basis.

By the way, I’ll take this opportunity to let you know that you can always leave me a comment below this article to tell me about your situation and tell me what has pushed the person you married to want a divorce.

How should I act around my ex who wants a divorce?

Declaring your eternal undying love, any type of blackmail, ultimatums or threats are all techniques to ban in your attempt at patching things up! You’re ready to try anything and maybe you’ve already made some unsuccessful attempts to remedy the situation, but of course it hasn’t worked if you haven’t been using the proper technique.

The first thing to understand is that your primary goal shouldn’t be getting back together (but don’t worry, that doesn’t mean that we’re not going to get there.) But talking about a relationship to a person that currently wants to be out of one is not the best call.

After realizing and saying my ex wants a divorce but I need marriage help you shouldn’t be overly nice, but you shouldn’t be a bad person either… I am referring to people that shell out huge amounts of shared money in order to have their revenge. To know how to act around your ex that wants a divorce, you have to accept their choice and not be too needy or too furious.

They want to leave; you have to accept that. They need space, same thing. This will however require a balance so you shouldn’t let the other person walk all over you and accept all their criticism or empty reproaches, and by the same token you shouldn’t aggravate the situation or create more conflict.

It’s up to you to find the right balance. Still being in love doesn’t mean that you have to become their scapegoat.

READ THIS
The main reasons your ex won't talk to you & what to do!

When your ex wants a divorce, adopt a slightly detached attitude so that you begin to rekindle the flames. We aren’t going to focus on getting back together; first we want to focus on creating a new dynamic in your relationship, by starting over from scratch with the same person. Do not talk about the past or make a big deal out of anything.

The goal here is to alleviate any tension in the air so that you can begin to communicate a new image of yourself that will benefit you in the future!

Getting back together will take time unless…

Getting back together with your ex that wants a divorce requires time, a lot of energy and patience as I explain in this article, but I’m sure you already know that. You know you’re going to have to make some sacrifices in order to move forward, but it is possible to reverse the chain of events before the divorce papers are signed.

Love is no stranger to miracles!

The question isn’t “Is there still hope,” but rather, “ What can I do for us, to make our relationship as great as possible?” Physical attraction is often still present but you have to kindle the fire in order to revive your ex’s feelings for you. You have a common past that bond you so you can definitely rekindle the passion between you.

So yes, there is hope, but that doesn’t mean that you’ll be back together within 15 days or after a few heart to hearts.

Thanks to pertinent advice via one on one coaching sessions for which you can make an appointment here, you’ll considerably increase your chances of reestablishing communication and seducing your ex in the best possible way.

Together, we can design a personalized plan of action that will help you save your marriage and to avoid having to wind up in front of a judge. If that’s already the case, don’t worry because you can still change the chain of events but you’ll have to have a good plan.

Tour coach to help you avoid a divorce,